To keep the lights on and the camera going I have a multi-purpose battery charger.  This contains around 24Wh of energy storage in eleven NiMh AA cells and circuitry to charge my laptop, satellite phone, mobile phone, camera battery and a PP3 for Ju's Dog Dazer. It can also power a white LED tent light that sheds just about enough light to cook by. A cunning design means that some of the AA cells can be removed from the internal battery stack and exchanged with flat ones from a torch or whatever.  The battery stack can be charged from a DC supply of between 10 and 30V (which includes the laptop's mains adapter) and from my Schmitt Dynohub and from a 5W solar panel. I seem to be able to generate about 8Wh from a day's pedaling, which is supplemented by whatever the solar panel can gather.

It seems that from a typical day of pedaling and weak sunshine I can garner enough power to run the laptop for about an hour. I try to keep the laptop's battery fully charged so that the power from the charger goes straight into doing something useful in the computer. It is of course possible to use it to charge the laptop's internal battery but this is less efficient because it involves an extra two conversions between chemical and electrical energy. 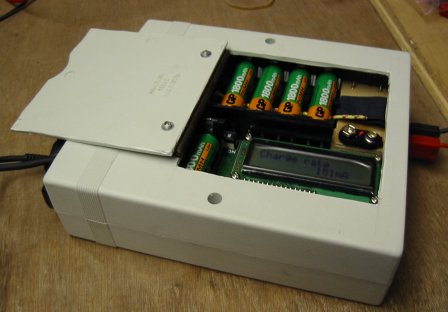 The display shows the charge status of the internal batteries and how much power is going in or out. You can also switch on and off the various outputs and set a timer for the battery charger. There are over-ride switches in case of software problems!

Here's a picture of me testing the dynamo side of things using a 'rolling road'. 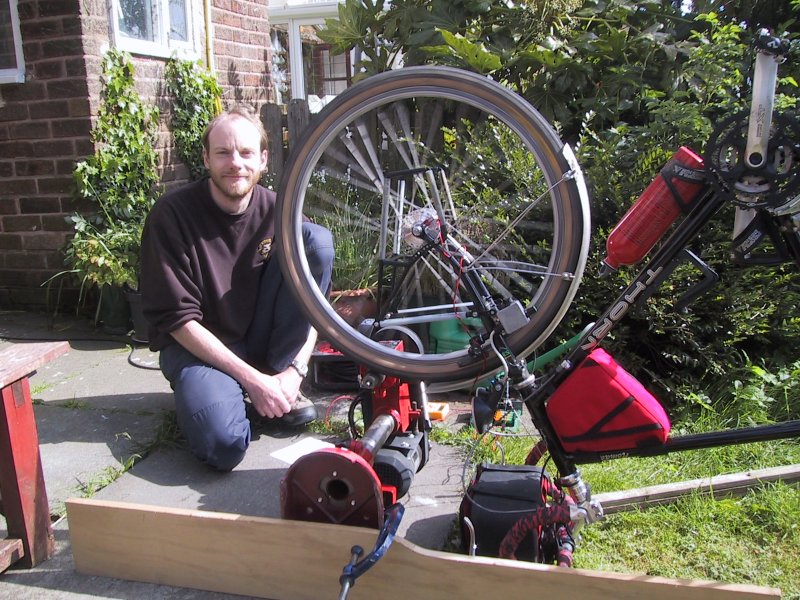 I used an oscilloscope to monitor the current through the batteries and found that it was a series of pulses at the frequency of the dynamo (not surprising as there is no smoothing). However it still seems to charge them OK.

There is a circuit diagram here. Basically it contains a stack of eleven 1800mA AA cells. These may be charged by either the dynamo via a bridge rectifier and a current limit, and/or a solar panel also via a current limit. The current limit uses a normally closed relay to provide a zero-resistance current path when the current is less than the limit. This relay is then opened by the micro-controller if the current exceeds the limit, thus forcing the current to flow through the limit circuitry. The batteries can also be charged by a SEPIC DC-DC convertor (LT1512) which produces a constant current of 200mA from a voltage in the range 10-30V, eg. a car cigarette lighter socket or the laptop mains adaptor.

Taking power from the AA cells are three DC-DC convertors. First is a step-up convertor to 16V to power my laptop. Second is a step-down convertor for the mobile phone, tent light and whatever else might need power. Third is another SEPIC convertor which provides a constant current to charge the digital camera battery, or a PP3. Also taking power from the AA cells is the guts of a Motorola satelite phone charger. There is something complicated about how this works so it seemed easiest to just use the charger wholesale.

I had a PCB made for me by www.pcbtrain.com who make one-offs for very reasonable prices. It is the only board I have designed that is heavily populated on both sides, as shown by the pictures below: 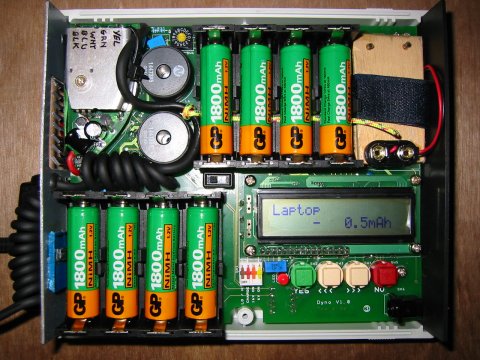 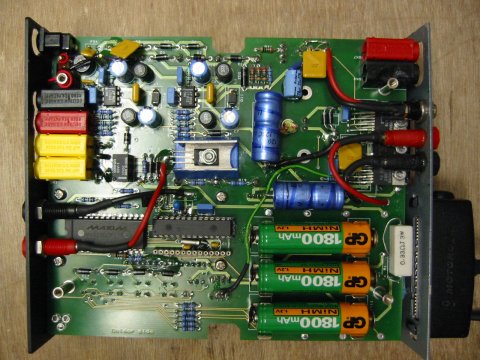