From Sinaia the road north leads to Brasov, the main city of Transilvana. Predictably it was a place of big roads and fast traffic, so we didn't stop until we reached the village of Harman a few kilometers beyond Brasov. Here the only hotel was too posh for us, but they let us stay for €15 when we asked if we could camp in their yard!

Harman is famous for its walled medieval village:

This part of Romania is called Szekely Land, it is inhabited by people of Hungarian origin and is quite different to the country to the south of the Carpathians. The ribbon development disappeared and the villages seemed tidier and a little more afluent. We much prefered the cycling here to that between Giurgiu and Sinaia. Many of the houses had beautiful carved wooden gateways such as this one:

In the countryside it felt as if little had changed in hundreds of years. Spring was in the air and people were out ploughing their fields:

Unfortunately spring then turned abruptly to winter. We woke one morning to find the world had turned white:

That day we had a high pass to cross, but progress on the snow covered road was slow and by 5pm we had only just reached the top of the pass. Luckily there were some holiday cabins near the road and we found one which had been left open. It was really just a garden shed with a table and some beds you wouldn't want to sleep on, but it gave us shelter from the wind and snow.

To whoever owns it we say "Noroc!" (Cheers!)

Next day was a little sunnier and we had an easy day downhill into Gheorgheni, cycling over packed snow on the pass and then slush or tarmac lower down.

From Gheorgheni it was over another pass and then down through the Bicaz gorge. Once again we found an open cabin near the top of the pass and spent the night there. Here we are on our way out in the morning: 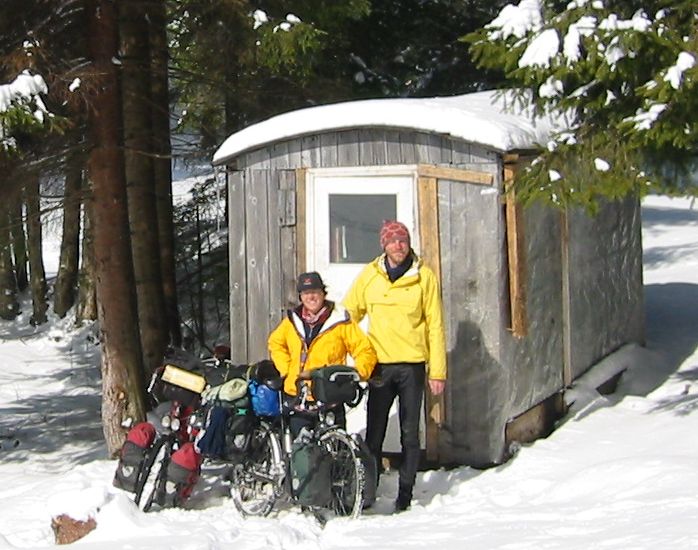 Before the gorge we passed the famous "Lacu Rosu" (Red Lake). Unfortunately it was less than totally impressive frozen over and covered in snow. In fact it looked like a field!

The Bicaz gorge though was good, in fact this day was our most enjoyable day's cycling in Romania. The scenery was stunning, the road surface wasn't too bad and the people we met were unusually friendly.

As was "Lac Izvoru Muntelui", a large reservoir to the north of Bicaz:

Although the beauty of the "MoldovoCim" cement works surpassed it all:

Near the border we stopped to see the monasteries of Moldovita and Sucevita. Both were painted with frescos depicting the usual untimely deaths of saints. Ju wrote:
" The frescos depicted saints' bodies and heads, but often not attached to each other"

From Sucevita it was downhill all the way. We were over the Carpathians and into the plains. Next came the rolling steppe of the Ukraine.