We spent two days exploring Meteora. On the morning we were to leave we woke to find the place blanketed in snow! Yannis told us that the roads would be blocked and we would be eaten by dogs if we went into the mountains - but we weren't detered!

Actually the main roads were clear and also pretty much traffic free so we didn't have any problems the first day. We camped in a wood and rigged the ground sheet protector as an extra roof to stop the snow piling up on the tent and collapsing it in the night. Ju took these photos the next morning:

The next couple of days we climbed higher into the Aliakmona valley. The weather didn't get any worse, slightly sub-zero but there was never much snow on the road. We met some kids who warned us that there were lots of dogs ahead, but we didn't think much of it. Then we met the dogs!

The following day was the toughest, not so many dogs, but the only road going through the valley was a dirt track. Naturally it hadn't been snow ploughed and not many vehicles had used it, so it still had a lot of snow on it. The slick tyres were completely useless and we just had to push our bikes for several kilometers. 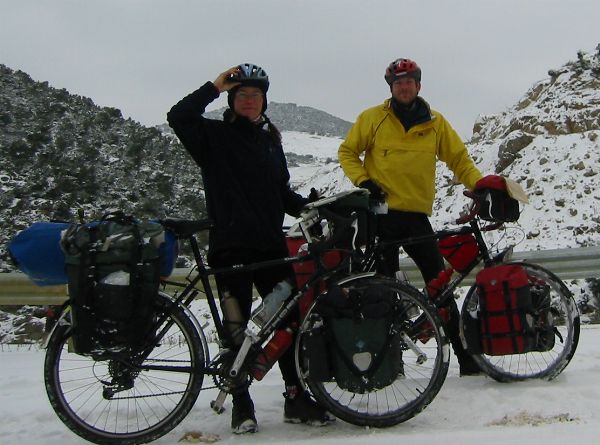 After that it was downhill to Vergina, the site of the tomb of the father of Alexander the Great. Apparently it is a completely unmissable tourist attraction and we were really looking forward to seeing it, but it was closed...