Although people kept telling us how bad the weather was, we weren't convinced. Some days it was 20'C, it was frequently sunny and usually the thunderstorms only came during the night. Still there was a certain amount of evidence that sometimes it really did rain:

We took the coast road south from Igoumenitsa to Mesolongi. It was remarkably quiet for an 'A' class road, but unfortunately was marred by a tunnel under the mouth of the Amvrakikos Gulf which was closed to cyclists. We wouldn't really have wanted to cycle through it, but we would have been very happy to take one of the Ro-Ro ferries that are now rusting at anchor nearby. Anyhow some friendly taxi drivers gave us a lift through for fifteen euros each.

It was the sort of road where goats were found just wandering across:

After Mesolongi it was east into the Corinthian Gulf and then by ferry to Rio. Here we were just in time to get the ferry, the bridge will be finished within the year:

Eastwards from Rio the coast road became busier so at Dhiakofto we cheated and took a rickety rack and pinion railway up into the mountains of the Peloponnese. This climbs the Vouraikos Gorge with scary views of deep chasms and small tunnels that you don't expect the train to fit through.

The railway ends at Kalavrita and then we had to pedal up some more. We were rewarded by the sight of the snowy peak of Mt Helmos not far above us, reminding us that it often snows down to sea level here at this time of the year.

The next day we had cold rain and the road came within a hundred metres of the snowline.

But then for our last couple of days before Mycenae the skies turned perfectly blue. The temperature at night went down below freezing but the days were warm. Not bad for mid-January! This is an early morning view from one of our campsites, the village in the centre is Psari.

For the final few kilometres to Mycenae we got a bit lost and ended up taking a dirt track short cut. We stopped to ask the way of a man tending his vineyard and he assured us (in Greek) that the track we were on was a dead end and that we should go back and take a different route including 7km of motorway. We persisted in believing our map and eventually bumped our way down to Mycenae, here we are en route: 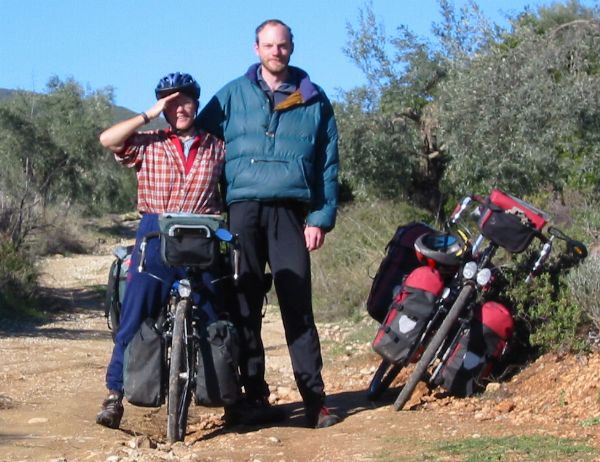