Penang to the Cameron Highlands

We left Penang by the car ferry and headed south on a busy highway. It wasn't a great ride, the road was narrow, we left late morning and by early afternoon it was pouring rain. But everything came right when we met a David, a local cycle tourist. He lives beside the main road and has a "network of spies" on the lookout for passing cycle tourists in need of hospitality (see Malaysia cycling info for his contact details). He showed us photos of other cyclists who had stopped by, including several we knew such as Jan and Maggie who we met in Siberia over a year ago. Also staying there was Cedric, a French cyclist who has ridden from France by way of Iran and India. That evening we were taken out to a Chinese housewarming party where a good time was had by all. Here we are leaving David's the following morning: 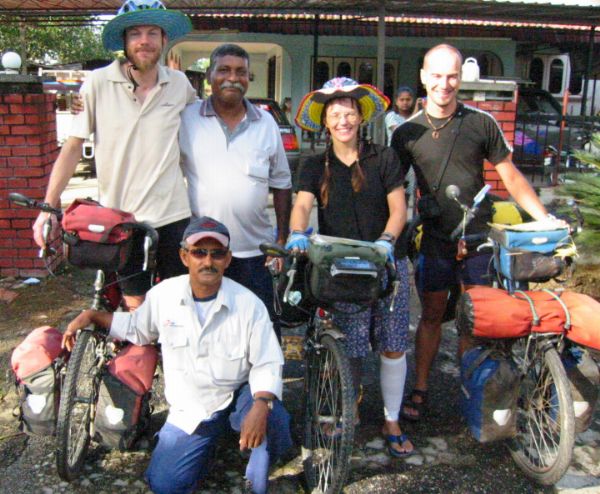 That day we stopped in Taiping where we saw big monitor lizards in the park (about 1m long but no photos because it was pouring with rain!) and had an interesting couple of hours going round the zoo.

Two days later we were heading into Ipoh about lunchtime, looking for a hotel. We asked a man in a garage who only knew about expensive hotels, but said "No problem, you can stay in my spare house". This sounded great to us, and things got off to a good start when Remond took us to his house so we could have a shower and throw our clothes in his washing machine. Then we went to meet his friend who had just caught an enormous fish, Remond said he would see us later and his friend took us to a local bar-resturant where the freshly caught fish was cooked up into a delicious meal and washed down with some beer. There was some problem with the key to the spare house but not to worry because someone's brother was bringing it, have some more beer.... By 6pm Remond was nowhere to be seen, his friend was pretty drunk and kept trying to kiss Ju and we felt it was time to leave. Remond then arrived to say that he wanted to take us out later that evening but we had had enough of drinking. Ju firmly told them that now it was cooler we wanted to ride and we scooted off into Ipoh to a hotel.

From Ipoh we took the new road into the Cameron Highlands, it was uphill all the way but the road was good, the traffic was light and the views were wonderful. The road ran through primary forest and had very little human habitation near it, we camped near it one night and went to sleep listening to the sounds of the jungle.

The Cameron Highlands are at around 1400m so the weather was like a warm English summers day. This means that a different range of plant species grow, including tomatoes, carrots and tea. Here's a typical market stall, everthing is wrapped in plastic bags and carrots are sold in pairs for 50 cents!

We stopped at a butterfly farm to admire their collection of insects:

During the three days we spent there saw some lovely flora, including "pitcher plants" which have an open pot of water containing digestive juices, insects fall into this trap and are digested.

See the Malaysian wildlife page for more and larger photos.